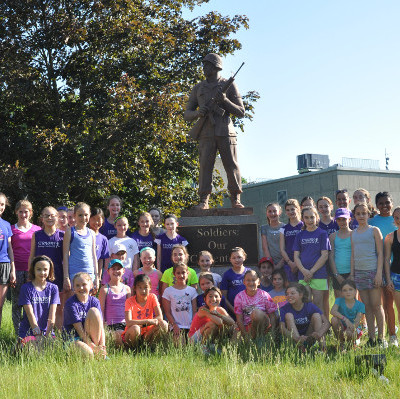 On Tuesday May 31, 2016 the Strivers Running Club for Girls were invited by Garrison Commander Lt. Col. Ryan Raymond to run the Fitness Trails at the Natick Army Labs. The Fitness Trail is nearly one and half miles and circles the perimeter of the Labs with beautiful views of Lake Cochituate. In addition, the Strivers had the opportunity to meet Command Sergeant Major, Erika M. Gholar the highest ranking female military official in the Northeast, and learn about the research being done on the development of food, clothing, shelters and other items to support Soldiers in the U.S. military. The girls were also able to try some surprisingly tasty MRE’s (Meals Ready to Eat) at their pre-race carb loading pasta party. We thank the Natick Army Labs for such a beautiful and insightful run.